After a week of rain we were blessed with a wonderful weekend of clear weather. Harley and I wanted to take advantage of that, so on Saturday we harnessed Tom and Charlie. They are half brother Belgians, 8 years old. They worked one season on an Amish farm before Harley bought them as 6 years olds off the English farm where they had not worked at all since the Amish training. Harley uses them to make hay on his farm. They are a very experienced confident team of horses. 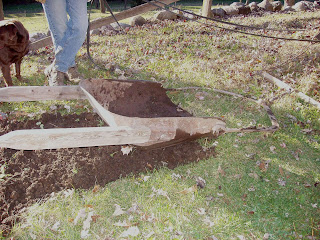 After moving a wagon out of the crib, we hitched to the slip scraper to take some compost up to the house. This device could be called a horse-drawn scoop or drag scraper. Steve Wood tells me that this device was used to build roads in the earlier days. Folks would turn out with their horses and scrapers and work together to build roads in their area. The Fresno scrapers were similar, but pulled by a multiple of horses. 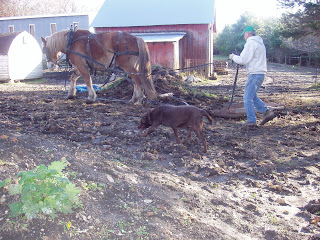 So back to our compost moving project: Two horses easily pulled the scraper up to the house. It is tight quarters around the raised flower beds, so we wanted to do this with just one horse. We thought Tom would be good to go with this single project as he is the more forward horse in the team. He surprised us both by not wanting to go forward even when I was out in front with the lead rope. We tried ground driving him on the flat by the barn but decided that we would need to spend much more time driving single before we ask him to pull the slip scraper. 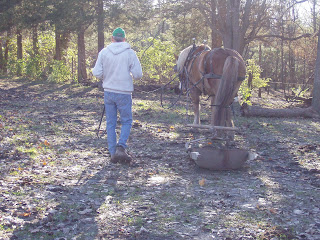 Next it was Charlie’s turn to ground drive single. We put the single lines on him and asked him to walk forward into our flat area. He surprised us by willingly moving out without my help. Both Harley and I were pleased with his confidence. He was comfortable with the slip scraper too. 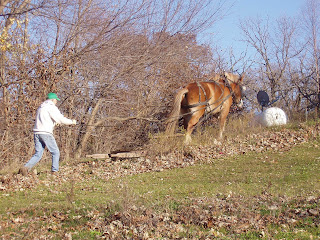 The approach to the house is steep but Charlie did a great job for us. He pulled the slip scraper up without hesitation and was steady when we dumped the load. He stood quietly for us while we flipped the scraper back. 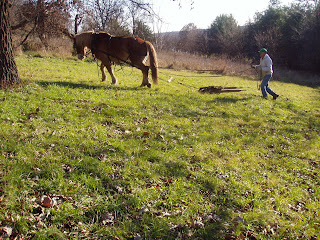 On the way back to the compost pile we found that a little of the lift the handle would pick up a load of fresh manure to add to the compost pile. I have seen these slip scrapers before but never in use. It was great fun learning something new to use with our horses. What a great piece of equipment to move dirt, gravel or manure, plus giving a horse a job that is not too tasking. 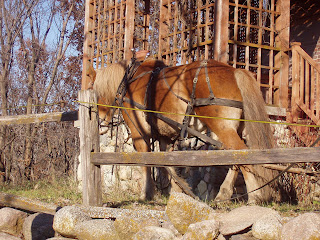 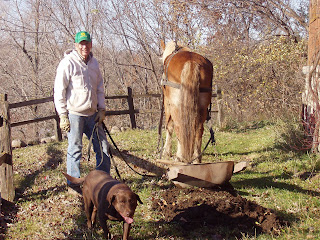 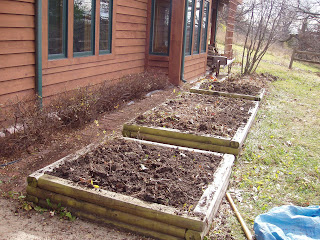 The next day was also great for doing horsey things. Harley wanted to drive three abreast, so we put Tom on the right, Charlie on the left and Babe in the middle. Babe is a four year old Belgian trained by Steve Wood. Harley used a butt rope around all three horses. 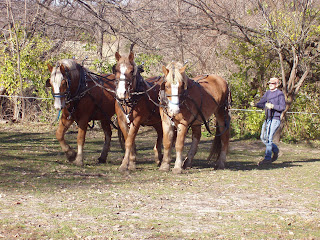 We ground drove them first just to be safe. Babe was very comfortable with the two other horses and did as we asked so we felt comfortable putting them to a heavy stone boat. 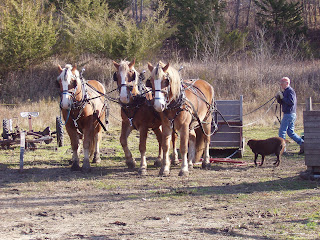 With Tom’s leadership they swung around easily to their position in front of the stone boat. Starting off slowly and together we headed down the lane to the south hayfield. 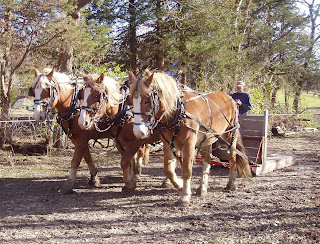 What a joy it was to see them work evenly to pull this stone boat. 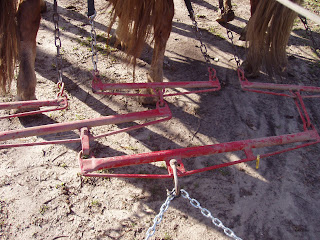 We were surprised by a fallen tree blocking the lane. The road was too narrow to turn the horses around so Harley stopped the horses and we tied Tom to a tree. I stood in front of Babe and Charlie while Harley walked back to the barn to get the chain saw. 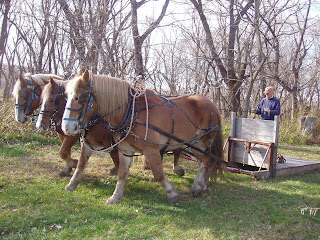 I really enjoy making every experience a learning experience for the horses. Babe was very relaxed during our wait. She fussed a little with her head, trying to rub the other horses but she was very cooperative when I corrected her. While Harley was running the chain saw, she watched but was not frightened with the noise. She has had some experience working in the woods while in training with Steve Wood. 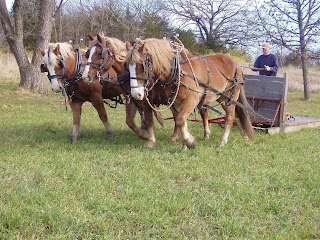 Once the roadway was cleared we circled the hayfield a few times. We had put the best rope halter on Babe with the longest lead rope. But I also wanted a long lead rope on Charlie who was on the left side. If I had a problem with Babe, I could easily move it to her halter and have control rather than trying to untie her lead rope from her hame. I felt doing that could put me in an unsafe position. Things were going well so I left it on Charlie.
The horses had a reasonable workout going around the field. 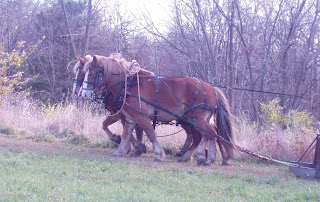 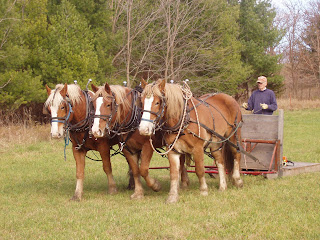 I had a great time driving them back to the barn. Both Harley and I were thrilled with the way the horses pulled together and worked as a team. We are going to enjoy doing more of this during the winter months. Driving three is a great way to get more horses in condition for next summer’s work. 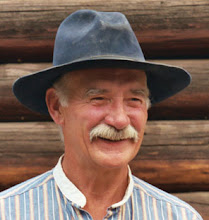